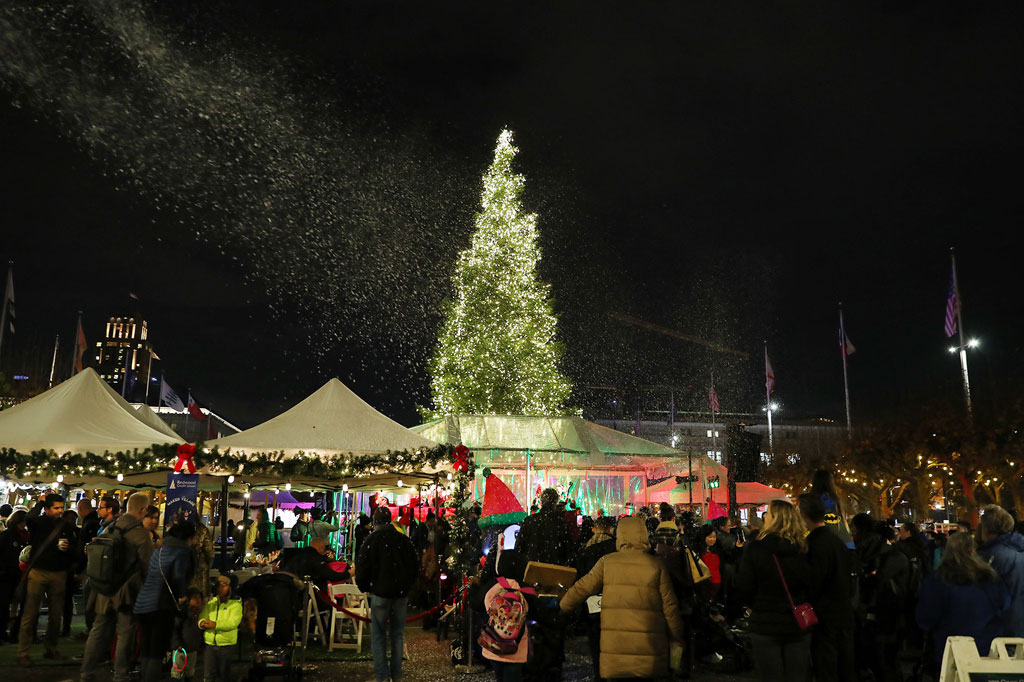 In recent years, holiday tree lighting dates have shifted to earlier days. In some parts of the country, the first Friday in December or the Friday after Thanksgiving have been the top days for tree lightings. However, in some places, those dates are beginning to change back again. The tradition is still alive and well, but the timing has changed, too.

The annual Rockefeller Center holiday tree lighting ceremony took place on December 2, the 88th time for this iconic holiday tree. It’s an event that was first started by construction workers in the 1930s. The Norway spruce tree arrived on November 14 from Oneonta, New York. This year, the tree weighs 11 tons and is decorated with 50,000 multi-colored LED lights. The tree is topped with a star made of three million Swarovski crystals.

While the traditional crowd filled the midtown Manhattan streets, this year there was a different feel to the event. The stars of NBC’s “Today” show were on hand to light the Christmas tree. “The Voice” coaches, Jimmy Fallon, and Dolly Parton were all in attendance. NBC also brought a musical group from the 1980s – Earth, Wind & Fire.

The Christmas tree lighting tradition has a long history. The practice dates back to the 18th century in Germany, when people would use candles to decorate the tree. These candles were glued to the tree branches using melted wax and pins. The tradition spread to the United Kingdom under Queen Victoria, who was influential during the early nineteenth century. Electric Christmas lights became popular after the industrial revolution, and inventor Edward H. Johnson, an associate of Thomas Edison, developed bulbs for the holiday season.

In the early 20th century, the National Christmas Tree was lit on the White House lawn. President Coolidge lit the 48-foot Balsam fir, which was donated by Middlebury College, a school in the President’s home state of Vermont. In the years that followed, live trees were lit on the White House grounds, but the ceremony grew more elaborate and expanded. In 1954, the event was moved to the Ellipse, and the focus was shifted to a Christmas Pageant of Peace, with smaller trees representing each state, and a Pathway of Peace.

LL Cool J is set to host the 99th annual National Holiday Tree Lighting on Sunday, December 5. The ceremony will be broadcast live on CBS and Paramount+. It will also feature performances from several music stars. During the ceremony, Chris Stapleton will sing “This Christmas.” H.E.R. and Kristin Chenoweth will also appear. LL Cool J has also performed during past national Christmas tree lighting ceremonies.

The first tree lighting was inspired by a letter written by students to President Herbert Hoover in 1923. The ceremony took place outdoors, with attendees required to wear masks. The performers, meanwhile, removed their masks when they took the stage. LL Cool J, who is inducted into the Rock and Roll Hall of Fame, discussed the significance of the event.

In honor of the holiday season, the St. Cecilia Chorus is holding its annual tree-lighting ceremony. The event will feature music by the chorus, a concert by the Saint Cecilia Adult Choir, and a Three Kings Christmas Market. The event will also include readings and children’s performances.

The event will also feature a Three Kings Christmas Market featuring local artisans and delicious German foods, provided by Whisy Dish Catering. The event is free and open to the public. Children will also have the opportunity to decorate cookies, and all attendees will be able to enjoy complimentary gift wrapping.

Don’t miss the Golden 1 Credit Union’s annual holiday tree-lighting ceremony. It takes place on November 24 at the Old Sacramento Waterfront. The ceremony includes a live dramatization of “Twas the Night Before Christmas” and family-friendly activities. The tree will remain up until New Year’s Day.

The tree lighting ceremony begins at 6 p.m. and will be followed by a holiday light show and live performances. There will also be carnival rides, food trucks, and other family-friendly activities. In addition to the tree lighting, there will be Stuff-a-Bus and Hello Kitty Cafe Truck festivities. The event concludes with an after-party celebrating the holidays.